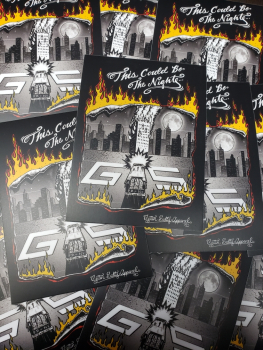 This Could Be the Night Decal

Gettin Salty This Could Be the Night Decal

In 1970, the area known as the South Bronx was relatively stable–a few vacant lots and a dense, lower-income population, but also a lot of well-kept buildings and desirable tracts of land. Two years later, it was a minefield of burned out buildings–“vacants”–an area riddled with arson, where in some places as much as 90 percent of the population had fled. In the middle of it all was Dennis Smith Engine Co. 82, the busiest fire company in the world. Dennis is the author of 16 books, most notable of which is Report from Engine Company 82, a story of his career as a firefighter with the New York City Fire Department in a South Bronx from the late 1960s and into the 1970s. He served for 18 years as a New York City firefighter from 1963 to 1981. During our podcast with Dennis, he mentioned that he had wrote on the wall "This Could Be the Night".  It could this week, this month ,or this year.. for the GREATEST JOB of your career. But be ready...IT COULD BE TONIGHT. You ready....Now thats salty...

By the way if you are only ordering stickers and decals you ALWAYS get Free Shipping.
Done automatically at checkout!

We only print on the highest quality vinyl stock (3 mil) and offer a FREE UV matte (3 mil) laminate finish over the vinyl to ensure the highest quality custom stickers. Lamination also helps the longevity of our products. Our Product will last outdoors and be fade free for up to 5 years.

This Could Be the Night Decal
Currently there are no reviews for this product. Share your opinion with others, be the first to write a review.